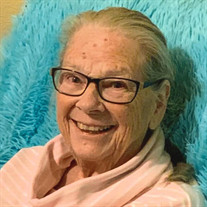 Martha Joan Hudson, 88 years old Bryan, Texas resident, completed her worldly journey Friday, December 31st, 2021 in Enid, Oklahoma. A private family celebration will take place in Colorado this summer. Martha Joan Hudson was born November 23rd, 1933 in Guthrie, Oklahoma to John Charles and Claudia (Hunter) Clark. Martha "Joan" lived in Guthrie, Oklahoma, graduating from Guthrie High School in 1951. Martha was 1951 Guthrie football homecoming queen and met the love of her life in Guthrie. Martha "Jo" met the love of her life in May of 1954, Von Lynn Hudson, and married just a few months later on August 3rd, 1954. Martha and Von moved to Stillwater in 1956 for Von to pursue training, while Joan stayed home to raise their first born beloved daughter, Jenny Lynn. Upon completion of diesel mechanic training, they then moved to Hays, Kansas. Von worked for Halliburton for 20 years, while Martha "Joan" was a homemaker raising her now family of three: Jenny, Craig, and Gary. The family would move several more times before they eventually landed in Texas. Von and Jo eventually ended up settling in Bryan, Texas, where it was warmer than Western Kansas or Oklahoma. Joan had a passion for little ones. Once her own children were grown, she made her income and spent her weeks watching many young children, that she cared for and loved like her own. Joan also dedicated much of her time at Freewill Baptist serving as the custodian and also teaching many years the girls junior high Sunday school class. Joan had a love of Shipley's doughnuts and Dr. Pepper, along with a wonderful group of freinds she met there almost daily. Joan had a green thumb that could be seen in her beautiful yard and plants she grew. In the summers, Von and Jo would spend their time at the family cabin in South Fork, Colorado. It was a special place for them to enjoy family, jeeping, and the mountains. The other yearly tradition Von and Jo rarely missed was the 89er Days Celebration in Guthrie, Oklahoma. She loved her children, grandchildren, and great-grands, along with many other kids she adopted as family along her life. Joan is survived by her daughter Jenny (Jarry) Hillman; son, Craig Hudson; daughter-in- law, Josephine Hudson; grandchildren, Jennifer (Dennom) Sullivan, Jason (Alyssa) Hillman, Ryan and Reese Hudson; great-grandchildren, Brock and Emma Sullivan, Sander and Stran Hillman; one brother, Sam (Ruth) Clark; one sister, Susie Dobbs, She was preceded in death by her parents; son, Gary Hudson; and husband Von Lynn Hudson. In lieu of flowers, contributions may be made to Fish Fisherman's Club to benefit grieving families who need counseling to assist with loss. Donations can be made through Anderson- Burris.

The family of Martha Joan Hudson created this Life Tributes page to make it easy to share your memories.

Send flowers to the Hudson family.