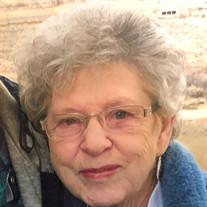 A celebration of life for Mary Anne Chambers, 81, will be Friday, April 22, 2022 at 2:00 pm at Anderson Burris Funeral Home Chapel in Enid with burial to follow at Enid Cemetery. Mary was born to the late L.C. Willard Smart and Francis “Maudine" (Jackson) Smart on February 15, 1941 in Longview, TX. She departed this life on Monday, April 18, 2022 in Oklahoma City surrounded by her family. She was a cherished wife, mother, grandmother, great-grandmother, and friend who brought love and life to all that knew her. Mary grew up in Fox, OK and attended school there. She married the love of her life, Henry Jefferson "Jay" Chambers on September 18, 1957 in Midland, CA, and they were married for nearly 65 years. They have such a beautiful story of shared dedication, admiration, and undying love for each other that began when they were teenagers. They lived in several cities and states during Jay’s years of service in the United States Navy and the early years of his civil career in the trucking business before eventually making their home in Enid. Along beside Jay, Mary became one of the first women semi-truck drivers in the early 1970s, and they enjoyed their time on the road together. They welcomed three daughters, Debbie, Meichelle, and Kristina, and they were her life. She most enjoyed time with her family. She also enjoyed supporting US military veterans, road trips, bowling, camping, bingo, family racing, and thrift-store shopping because they were all activities she did with her cherished family and friends. She was always the one quietly behind the scenes working to help each one of us achieve our own wishes and dreams. Mary is preceded in death by her parents; brothers, James Smart and Charles Smart; sisters-in-law Patsy Chambers and Mary "Tootsie" Chambers; nieces, Dana Hoggard and Tina Barnes. Mary is survived by her loving husband, Jay; daughters Deborah Kraeutner of Crescent, Meichelle Colville (Lonnie) of Enid, and Kristina Pumphrey (Nate) of Edmond; brother Dennis Smart (Suzanne) of Yukon; sister Pam Evans (CD) Of Marietta; brother-in-law Bill Chambers; grandchildren Paula Rauschenberg (Johnie) of Enid, Jayme Von Schriltz (Casey) of Enid, Tabetha Chambers of Crescent, Stacie Canning (Jacob) of Enid, Tiffany Kent (Chad) of Enid, Tyler Pumphrey of Edmond, Reed Pumphrey of Edmond, and Brayden Kraeutner of Crescent; 12 great-grandchildren and numerous additional family and friends. Our world will never be the same without our beloved Mary/Mom/Grandma.

A celebration of life for Mary Anne Chambers, 81, will be Friday, April 22, 2022 at 2:00 pm at Anderson Burris Funeral Home Chapel in Enid with burial to follow at Enid Cemetery. Mary was born to the late L.C. Willard Smart and Francis &#8220;Maudine"... View Obituary & Service Information

The family of Mary Anne Chambers created this Life Tributes page to make it easy to share your memories.

A celebration of life for Mary Anne Chambers, 81, will be Friday,...

Send flowers to the Chambers family.