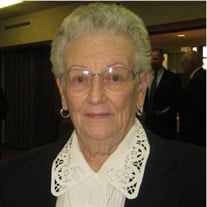 Celebration of life service for Mary Lansdown, 95 of Enid, will be 2:00 PM Saturday, February 5, 2022 at the Keatley Family Memorial Chapel at the Commons, also previously known as Faith Lutheran Church, with Rev. Gail Edmison officiating. Visitation before the service will be from 12:30 to 2:00 PM. A private family graveside service will be held in the near future. Arrangements are by Anderson-Burris Funeral Home & Crematory. Mary Maxine Tomlin Lansdown of Enid passed from this world to be with her Lord January 28, 2022 after a short illness. Maxine was born on April 14, 1926, in Helena, Oklahoma to Ervin and Virgie (Hayden) Tomlin. After graduating from Helena High School in 1944, she graduated Enid Business College and began work at McClellan-Smith Supply where she met and married Raymond Parker Smith in 1946. To this union three boys were born, Douglas, David, and Brian, who were the joy of her life. Her family was active in the First United Methodist Church where Maxine Participated in United Methodist Women, Christian Homemakers, and served as a board member. She was a proud member of the Friendship Sunday School Class and served a term as class president. Mostly a homemaker after motherhood, Maxine enjoyed working for Kingfisher Federal Savings & Loan for a decade beginning in 1965. In 1972 Maxine, an only child, married Paul Lansdown, one of fifteen children. This event greatly expanded her opportunity for joy from family gatherings. During their retirement years they trailered and camped with the abundance of Lansdown’s, gardened to the point of excess, wore out several fishing poles, square danced wherever they could, and traveled to most every state in the country. In her later years Maxine tried out most every retirement center in town. Surrounded by lifetime friends and acquaintances she enjoyed the meals, card games, and many activities. Maxine was predeceased by her parents, Ervin and “Toots” Tomlin, sons Douglas and David Smith, her first husband and father of her children Raymond Smith, and her husband Paul Lansdown. She is survived by son Brian Smith, grandson Cody Smith, granddaughter Casey and her husband Zach Skelton, stepdaughter Connie Quisenberry, stepsons David Lansdown, Dan Lansdown and his wife Susan, and their children and grandchildren. Memorials may be made through the funeral home to Hospice Circle of Love.

The family of Mary Maxine Tomlin Lansdown created this Life Tributes page to make it easy to share your memories.

Celebration of life service for Mary Lansdown, 95 of Enid, will...

Send flowers to the Lansdown family.