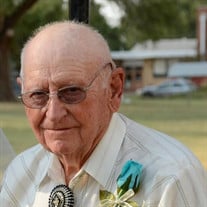 Merle D. Hutcheson was born May 14,1930, in a dugout, on the Alfalfa /Grant County line between Jet and Nash. He was the 5th child of Perry Hutcheson(5’4”), who made the Cherokee Strip land run , and his wife Mary(4’11”). Merle always said he was too young for one war and to old for the next, so he farmed the soil and cared for the land and its life forms, as was his heritage. His older brother was 12 years older and his younger brother, Charlie was born on his 11th birthday, so he grew up playing with a plethora of cousins ,all of which were girls. He knew those girls could be kind of tough. One of them, straighten his teeth with a baseball bat and he never played baseball again. However, that never stopped him from excelling at football, boxing, and basketball. As a sophomore, he was a guard for the Jet Tigers football team, but his junior year he was moved to running back. As a senior his responsibilities increased to team captain, quarterback, and sometimes the kicker. Games were played on a field of stickers Boxing was a sport he shared with the help of his dad, starting at the 144-151 lb. class. He fought a total of 13 fights, finishing at the 160 lb. class and won the Golden Gloves Championship, fighting with a broken thumb. He never lost a fight, most decisions were TKO. Basketball for Jet High was played at the Class A level in 1948 and the Jet boys were beat by Norman in the finals for a narrow victory. The Hutcheson kids, Vernald, Glenda, Jean, and Merle, walked down the railroad tracks, which cut across country, to go to the Jet school , it was about 6 miles one way. Merle was friendly, neighborly, honest, hard-working, family man, and it didn’t hurt that he was passable good looking. His junior year in high school he touched eyes with a real pretty, talented sophomore pianist, Barbara Lou Mc Dowell. Their love affair lasted 62 years until her death in 2012. Merle always said she was one of the prettiest girls in the county. Long after three children graduated from Jet/Jet-Nash schools Merle and Barbara continued to support the school /church activities with their time, effort, and money. Merle was actively farming and checking the cattle daily until March of this year. He enjoyed the social benefits of the Jet Senior Citizens and the small little restaurants in the Jet and Nash communities. He loved to read or watch a good western, play cards or dominos with friends and family, or enjoy the quite victory of a good day of fishing. If he caught fish, he shared them with other fishermen, friends, and family. Three children, 5 grands, 9 great grands, 4 extended and more eagerly expected, and almost every single one has been fishing with “Grandpa Crunchy”. A nickname from the youngest grandson who mispronounced “Hutch”, Merle’s nickname from high school. All 5 of Merle’s grandchildren have served in the United States Armed Forces or been married to someone who was actively deployed. He kept in tact all the land that was homesteaded by Barbara‘s family, the George Spivy’s, the Robert Clark’s, and the Edmond/Vertice Tucker’s. It was Barbara’s wish to qualify all three of the original lands in the Oklahoma Centennial Farm Program and he accomplished that this spring. Merle made his own stamp on history when he added some of his own land purchases to the total. As per Merle and Barbara’s wishes, they have both been cremated following God’s teachings of “Dust to Dust”. July 25, 2020 has been reserved as a day of remembrance for the family, friends, and community of Jet as they celebrate together at the Jet Community Building at noon, the remarkable man who was Merle Hutcheson. If anyone would like to donate in Merle’s name, the family requests all donations be made to either the Jet Senior Citizens or the Jet Volunteer Fire Department thru Anderson-Burris Funeral Home.

The family of Merle D. Hutcheson created this Life Tributes page to make it easy to share your memories.

Send flowers to the Hutcheson family.