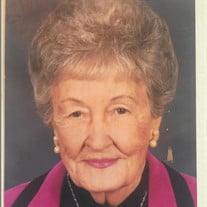 Graveside service for Drucilla Hackworth, 97, will be Friday, October 9, 2020 at 1:30 PM in Memorial Park Cemetery Garden Chapel with Rev. Devon Krause officiating. Arrangements are by Anderson-Burris Funeral Home & Crematory. The family is encouraging that those in attendance wear a mask please. Drucilla was born on January 9, 1923 in Durant, Oklahoma to James Robert, Sr. and Mildred Ester (Edwards) Reed, and passed away on Saturday, October 3, 2020, in Tahlequah, Oklahoma. Drucilla graduated from Durant High School in 1940. At her senior prom she met the love of her life, Sylvester Lee “Hack” Hackworth. On January 23, 1941 she married him in Oklahoma City. They made their home in Durant until moving to Pauls Valley where they built a new house. They later moved to Oklahoma City near Lake Hefner. Hack was a Meadow Gold milkman there until moving to Enid in 1955 to be a professional photographer. Drucilla continued to be a loving wife to her husband and mother to their three children at their new white brick ranch house on Munger Drive. Drucilla was a member of First United Methodist Church, where she was part of the Friendship Sunday School Class, and a member of the United Methodist Women. She was also a member of the Enid Garden Club and known for the beautiful garden at her new Enid home that her husband and family built. Drucilla and Hack owned the Monarch Photography Studio in Enid until their early retirement. Then, the couple traveled extensively throughout the United States in a recreational vehicle and had many adventures. In 2010 she moved to Tahlequah, Oklahoma to live with her son and daughter-in-law in a new bedroom apartment suite built for her. She resided there until her death. Drucilla is survived by her two children Linda Drucilla (Hackworth) Snow of Fairview, and LTC S.L. “Hack”, Hackworth, Jr. and wife Shirley of Tahlequah. She will also be missed by her 9 grandchildren, 13 great grandchildren, and 5 great, great grandchildren. She was preceded in death by her husband Hack in 2008, son Robert Reed Hackworth in 2017, and brother LTC James Robert “Bob” Reed, Jr in 1992. Memorials may be made through Anderson-Burris to First United Methodist Church.

The family of Mildred Drucilla Hackworth created this Life Tributes page to make it easy to share your memories.

Graveside service for Drucilla Hackworth, 97, will be Friday,...

Send flowers to the Hackworth family.