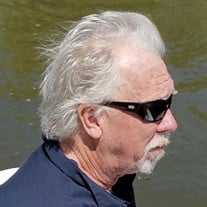 Ocus William Murphy III principal, entrepreneur, real estate mogul, and greatest man to ever live died January 8, 2021. Ocus was a master fisherman and his death has made every fish in the state rest a little easier. When he was young, he claimed to light a match with his .22 and even shoot a coin out of the air. We have no reason to doubt him now. Much to his parents' surprise he graduated high school from Enid, received his degree in education from Phillips, and WOW even a Masters from Northwestern. More importantly he got his real education from the school of hard knocks. He was a bad dude that had no fear of anyone or anything. He met the love of his life, Ky, a Montessori preschool teacher in Enid, when he helped her with a flat tire after a Leon Russell concert. They were married in 1973 until she passed in 2017. He lived for her and she lived for their four wonderful grandchildren, Jude the Dude, Smarty Marty, Miss Violet, and Tarin the Sleepy. They loved their grandchildren and spoiled them rotten. Candy? Yes. Cookies? Yes. Toy Store? Of course. Ocus carried on Ky's legacy of "yes" until his last day with us. He was idolized by his son, Kaleb, and daughter, Sara. He provided much needed daily advice and only asked for food in return. He often boasted about finding the latest food joint were the meat fell off the rib. He talked to his kids every day and made holidays so much fun. You couldn't meet a more thoughtful gift giver than him. Ocus excelled at fixing anything put in front of him. His motto was "measure once and cut twice". He frequently had parts left over when putting things together. A trip to the lumber yard was required every hour. But boy did he make it fun. His best helper was his little brother Tim, retired science teacher and strongman. Ocus was appreciative of his children's spouses, Robin and Michael, and was relieved his kid's each found someone to love like he loved Ky. He also had a deep brotherhood in mischief and mayhem with his lifelong best friend Carroll Walker. During his lifetime he lost his parents, Ocus and June Murphy, his sister, Judy Norris, and his wife Ky also known as Baby Doll. Here are just a few of the people that would give anything to spend one more day with him: son Kaleb and Robin Murphy, daughter Sara and Michael Bondurant, Leon Russell, brother Tim and Sheri Murphy, Chuck Norris, grandchildren, Jude, Marty, Violet and Tarin, nephews Nathan and Jenna Murphy and Derek and Shelly Stephens, nieces Christa and Zach McGeeney and Stefanie and John Bradford, the Guy from Cash Cab, and countless family members and friends. Because Ocus wasn't a fancy man, his family is hosting a come and go visitation on January 14th, 2021 from 2-4pm at the AB Circle of Life Event Center in Enid, 3022 N. Van Buren, to talk about how he blew up a field as a kid or his motorcycle racing. COVID precautions will be taken. A full blown embarrassingly sappy service will be held in the future. In lieu of flowers please consider making a donation In Memoriam to Ocus' favorite charity St. Jude Children's Research Hospital. Ocus loved children and had a soft spot for those in need. Long live Ocus' legacy in his children, grandchildren, and those beyond. He was a beautiful soul that brought ease and comfort to those around him. He was strong and blessed. However, he never took that for granted and would give endlessly to those that needed his help.

Ocus William Murphy III principal, entrepreneur, real estate mogul, and greatest man to ever live died January 8, 2021. Ocus was a master fisherman and his death has made every fish in the state rest a little easier. When he was young, he claimed... View Obituary & Service Information

The family of Ocus William Murphy III created this Life Tributes page to make it easy to share your memories.

Send flowers to the Murphy family.