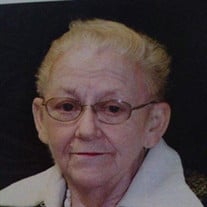 Patricia Ruth Arnbrecht was born on July 30, 1933 in Shattuck, Oklahoma to Bessie Ruth (Shelton) Love and Len Wilbur Love. Patricia went to be with her LORD and SAVIOR on September 24, 2020. Patricia spent her early life living on a farm... View Obituary & Service Information

The family of Patricia Ruth Arnbrecht created this Life Tributes page to make it easy to share your memories.

Send flowers to the Arnbrecht family.