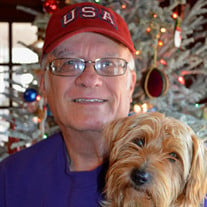 Celebration of Life Service for Ralph Duwayne Hooper, 82 of Longdale, OK will be 11:00 a.m. Wednesday, December 9, 2020, in the Jet United Methodist Church with Rev. Harvey Phelps and Rev. Lisa Anderson officiating. Visitation will be Tuesday from 5:30 to 7:30 at Anderson-Burris Funeral Home. Services are under the direction of Anderson-Burris Funeral Home & Crematory. Ralph was born April 24, 1938 in Shawnee, OK to Ralph and Dorothy Bolin Hooper and passed away Tuesday, December 2, 2020. The son of a United Methodist Preacher, the family moved frequently with stops in Shawnee, Jet, Enid and Lawton to name a few. Ralph loved adventure; whether it be hunting, hiking, camping, skiing or traveling. He loved learning, education, teaching and coaching. He loved people, all people, and loved talking with people, a lot! He cherished his Christian faith, his Methodist heritage, and was passionate in his support of Kairos Prison Ministry at Crabtree Correctional Facility in Helena, OK. Ralph was extremely proud of all of his children and grandchildren, bragging on them to anyone who would listen. He was an avid Oklahoma State Cowboy Fan who couldn’t possibly have enough OSU gear to wear. Ralph was a person of action, sometimes with little thought but always with courage. He was a character and will be greatly missed. Ralph was preceded in death by his parents, brother Robert and sister Dorothy Esther. He is survived by his wife Carmie, children, Jeff Hooper of Plano, TX, Kris Hooper of Bixby, OK, Genise Cushman of Littleton, CO and David Hooper of San Diego, CA, eight grandchildren, Ian, Gabrielle, Renee, Eric, Atticus, Alethia and Charlotte Hooper, and Isabella Cushman, and a sister Genell Harris of Hot Springs, AR. Memorials may be made through the funeral home to Kairos Prison Ministry.

The family of Ralph Duwayne Hooper created this Life Tributes page to make it easy to share your memories.

Celebration of Life Service for Ralph Duwayne Hooper, 82 of Longdale,...

Send flowers to the Hooper family.