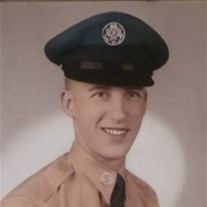 Memorial services for Raymond C. Shirk, 86 of Enid, will be 10:00 AM, Monday March 18, 2019 in Anderson-Burris Funeral Home Chapel with Reverend Dwayne Schroeder officiating. Inurnment will be in Memorial Park Cemetery under the direction of Anderson-Burris Funeral Home and Crematory. Raymond was born on April 24, 1932 in Bellefonte, Pennsylvania to James and Mary (Mitchell) Shirk and joined our heavenly father on March 13, 2019 in Enid, Oklahoma. He graduated from Lock Haven High School in Pennsylvania and enlisted in the U.S. Air Force, serving four years, and was a Korean war veteran. Raymond met Beverly Reed, while stationed at Vance Air Force Base and they married on May 15, 1959 in Enid, where they made their home. They resided in Pennsylvania for two years before moving to Chicago for many years. Raymond worked as a Lab Tech for Koppers chemical company. He retired in 1992, and they returned to Enid. Raymond was a member of Redeemer Lutheran Church, American Legion and VFW. He worked part time as a janitor at Enid Library. He enjoyed traveling, family, church, gardening and had beautiful gardens and flowers. He was a kind, gentle soul, loving father and beloved husband. He was preceded in death by his wife, Beverly Anne on March 5, 2009; his parents; five brothers, and two sisters. Raymond is survived by his children, Brenda Shirk of Milesburg, Pennsylvania, Sherri Wiseman and William Shirk, both of Enid; four grandchildren, five great grandchildren, nieces, nephews, and other relatives and friends.

Memorial services for Raymond C. Shirk, 86 of Enid, will be 10:00 AM, Monday March 18, 2019 in Anderson-Burris Funeral Home Chapel with Reverend Dwayne Schroeder officiating. Inurnment will be in Memorial Park Cemetery under the direction of... View Obituary & Service Information

The family of Raymond C. Shirk created this Life Tributes page to make it easy to share your memories.

Send flowers to the Shirk family.