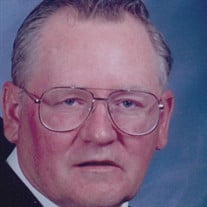 Rev. Larry D. Maze, 76, went to be with his Lord and Savior Tuesday, October 19, 2021. A Celebration of Life service will be held Tuesday, October 26th at 1:00 PM at Fairview First Assembly of God. James Maze and Charlie Newman will be officiating. The graveside service will follow at Bethel Cemetery with arrangements by Anderson-Burris Funeral Home and Crematory. Larry was born August 13, 1945 in Enid, Oklahoma to Darrell and Elsie (Kirk) Maze. Larry married the love of his life, Jeannie L. (Kincheloe) Maze on December 5, 1969 in Fairview, Oklahoma. Larry served in the National Guard and Air Force from 1965 to 1969. Larry was an ordained minister in the Assemblies of God, and pastored several churches throughout Oklahoma. In addition to being a Pastor, he was an Evangelist and was part of a singing group with his wife and sister-in-law. Despite health issues for the last 30 years, Larry took joy in ministering to everyone he met. Larry was quick to pray with those he met and always had an encouraging word. He was known to have a funny joke or story at any moment. He enjoyed being a father and granddad, delighted in his family moments, and loved his two dogs who were his constant companions. Larry is survived by his four children: James Maze and wife Linda; Debra (Maze) Lamar and husband Adrian; Stacie Maze; Jennifer Maze-Hennig and husband Scott; seven grandchildren: Calley Lamar, Stephen Lamar and wife Stacy, Matthew Lamar, Jamie Maze and wife Kyla, Taylor (Maze) Minshall, Chelsey Gohr and Krysha Gohr; and Seven great-grandchildren; his brothers Dennis Maze; Garrell and wife Kathy Maze; Brother-in-law Everett Roach; Sister-in-law Earlene Kincheloe: and numerous nieces, nephews, and cousins. Larry will be reunited in Heaven with his wife Rev. Jeannie L. (Kincheloe) Maze and his parents Darrell and Elsie (Kirk) Maze, Sister Donna (Maze) Roach and Brother Darrell Loyd Maze; two sons, Larry Don and Jeffery; and grandchildren lost before they had a chance at a life with us. Memorials may be made to Assembly of God Missions.

Rev. Larry D. Maze, 76, went to be with his Lord and Savior Tuesday, October 19, 2021. A Celebration of Life service will be held Tuesday, October 26th at 1:00 PM at Fairview First Assembly of God. James Maze and Charlie Newman will be officiating.... View Obituary & Service Information

The family of Rev. Larry D. Maze created this Life Tributes page to make it easy to share your memories.

Send flowers to the Maze family.