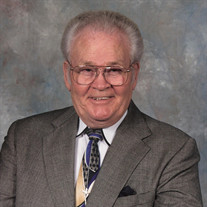 IN LOVING MEMORY OF MISSIONARY-EVANGELIST REX PARNELL Rex Carroll Parnell came into this world on June 19, 1932 in Hagerman, New Mexico to the late Ernest Oliver Parnell and Camilla Lea (Patterson) Parnell. He was affectionately called “Papa Rex” or “old man”. He made his triumphant transition to glory on 5:48 March 23, 2019 in the comfort of his own home in Enid Oklahoma. Rex Parnell grew up in a pioneer traveling ministry with his Evangelist father, mother and 5 siblings and was drafted to the military in 1952. He met and married Wilma Jolene Wilson-Parnell on November 25, 1969 and they were about to celebrate their 50th wedding anniversary. They have 1 daughter, Jill Reed, of Hunt, TX. In addition, he leaves five grandchildren, Danielle Renee Parnell- Floyd and husband, Benjamin; Shaleen Nicole Cleary and husband, Jonathan; Rance Wayne Wilson II and wife Randi and O’Tika Lynn Arnold, and Hannah Whitney Reed to cherish his memory. He also leaves eleven great grandchildren who were close at his side during his last days. Rex Parnell is survived by two sisters; Phyllis Parnell-Jackson, St Louis, Missouri and Tamara Parnell Williams and husband Donnie, Coweta, Oklahoma. Rex was preceded in death by his parents, his brothers Doyle, his twin, Roy, and Guy Neal; and sisters Bonnie Hinkle and Sharon Erwin. He will be fondly remembered by many nieces and nephews, extended family, his missions family and many many friends across the world. Rex became CEO of Tower of Faith World Missions in 1980. He helped establish a faith foundation in churches in the United States and Belize, Mexico and Uganda, E. Africa. He has written three books in English: "Our Place in Him", "Walking in the Steps of that Faith", also in Spanish, and "Power to Become Sons". His first mission trip was to Haiti in the 70's and then later to Mexico where 4 churches were established. He went to Belize, Central America for 17 years and established 24 churches then went to Uganda, Africa for 14 years where he helped establish 18 churches. A funeral service will be held at 2:00 PM on Friday, March 29, 2019, at World Harvest Church, 1419 S. Garland Rd. Enid, OK. For out of town guests, dinner will be provided at 12:30 PM at World Harvest Church. Visitation with family will be Thursday from 6:00-8:00 PM at Anderson-Burris Funeral Home & Crematory. The family requests that any correspondence or memorial donations be designated for Tower of Faith Community Churches in Uganda E. Africa, attention Anderson Burris Funeral Home, 3002 N Van Buren Enid, OK 73703.

The family of Rex Carroll Parnell created this Life Tributes page to make it easy to share your memories.

Send flowers to the Parnell family.