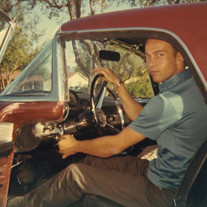 Robert James Bracken “Bob” (10/26/1942 – 5/6/2020) Bob was born in the City of South San Francisco, California and raised as the son of a Naval Officer (Christopher) and his mom (Annabelle) between the Cities of South San Francisco, El Cajon, CA, and Honolulu, Hawaii. In his youth, he and his father would often watch San Francisco Seals Professional Baseball Games (of the old Pacific Coast League) and the San Diego Padres on Lane Field (before the Padres became a Major League Baseball Club). He attended Grossmont High School in La Mesa, CA before graduating from Farrington High on the Island of Oahu, HI. He served our nation as a member of the United States Army and in 1966 began a career with Rohr Industries in Chula Vista, CA. Originally hired as a key punch operator, he went on to be a Computer Programmer in COBOL (the major system of its time). All told, Bob spent 37 years with Rohr Industries. In the late 1960’s, he met Jane Marie Nisbet while they both worked at Rohr and were married in September 1969. Bob and Jane Bracken went on to raise three (3) boys in Jamul, CA on a small “gentleman’s” ranch. As a dad, he was a Little League Baseball and Pop Warner (youth tackle football) Coach, while pursuing his hobbies of racing pigeons and pitching on the Rohr Industries softball team. To know Bob was to know his love of bowling, a sport he pursued most of his life. In 1967, Bob and his father won the California State Amateur Pairs Championship. He had numerous perfect games to his credit. Bob was a huge sports fan, rarely missing Opening Day for his San Diego Padres (and often staying up late at night watching games from his home in Oklahoma on the internet). He also loved supporting San Diego State University football and basketball. In 2005, Bob and Jane Bracken retired to a beautiful ranch home they bought in Waukomis, OK. In retirement, Bob served on the local (Enid, OK) Board of Directors of the United States Bowling Congress, enjoyed involvement in the Lawn Garden Tractor Pull Club and even served on the City of Waukomis Street Committee. He loved spending time at the lake in the summer with family and friends. He and his son, Dennis, hosted countless BBQ’s at the ranch while cheering on The Sooners! Bob passed away peacefully at home in Waukomis, OK. His passing was preceded by the death of his wife, Jane Marie Bracken in 2016. Bob Bracken is survived by his sister, Phyllis Chapman (El Cajon, CA), his three (3) sons: Scott (Broken Arrow, OK), Michael and his wife Khozette (Palm Desert, CA) and Dennis (Waukomis, OK). He is also survived by nine (9) grandchildren: Kristina, Ashley, Joshua, Ben, Leah, Joshua, Anna Marie, Robert and Khloë. He was also blessed with five (5) great-grandchildren: Miela, Kristen, Evalon, Aiden and Norah. Bob Bracken loved his family and friends dearly. He was very observant and often a man of few words. He was old school in believing in an honest day’s work for an honest day’s pay and personal accountability. He was loved by so many and will be missed by his family and friends. Dad, Pops, Grandpa and Papa, we love and miss you!

The family of Robert James Bracken created this Life Tributes page to make it easy to share your memories.

Send flowers to the Bracken family.