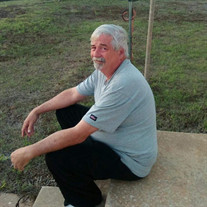 Celebration of Life Service for Robert “Catfish” A. Cunningham, 69 of Enid, will be 2:00 p.m.Friday, February 26, 2021, in the Anderson-Burris Funeral Home Chapel with Maxwell Meier officiating. Robert was born January 1, 1952, in Enid to John and Lois Hotson Cunningham, and passed away Saturday, February 20, 2021 at his home in Enid. He grew up in Enid and graduated from Marshall High School. Robert later graduated from Barber College and held various jobs. He married Beth Swalve on July 7, 1982 in Texas. Robert was a pressman for TM Printing from 1999 to 2016 and he worked in the automotive department at Walmart. Robert enjoyed watching sunrises and sunsets. He was a drummer for Saturday Night Special and other bands. Robert was preceded in death by his father, sister Rebecca Estle, stepdad, Everett Roberts, daughter Sabrina Cunningham, brother-in-law Delmer Brune, grandparents James and Norma Hotson, and Ira and Frances Cunningham. He is survived by his wife Beth, children Christopher Cunningham and fiancé Stephanie, Robin Ladd and husband Josh, Andrew Cunningham and Kindra Lagendorf, 13 grandchildren, 3 great-grandchildren; mother, Lois Roberts; brother John Cunningham; sister Mary Brune; loyal friend, Tessa; other relatives and friends. Memorials may be made in his name to Anderson-Burris Funeral Home.

The family of Robert "Catfish" Andrew Cunningham created this Life Tributes page to make it easy to share your memories.

Celebration of Life Service for Robert “Catfish” A. Cunningham,...

Send flowers to the Cunningham family.