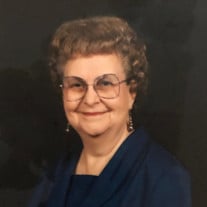 Celebration of Life Service for Roberta McDowell, 97, will be Thursday, July 25, 2019 at 2:00 p.m. in First Christian Church, Cherokee. Cremation arrangements are by Anderson-Burris Funeral Home & Crematory. Roberta was born April 6, 1922 on a farm in Beaver County, Oklahoma, the daughter of Ike and Ava (Rector) Henline and died on July 21, 2019 in Enid with her family by her side. Roberta attended school at Palestine and Turpin, Oklahoma and moved to Fairview, Oklahoma when she was a freshman, and graduated in 1940 from Fairview High School. She was one of the first homecoming queens! She married Hal Edward Goode of Aline, Oklahoma. Hal served in the U.S. Navy in the South Pacific during WWII. Hal and Roberta had three children, Coleen Kay, Linda Donnelle, and Gary Alan. After Hal’s medical discharge from the service they lived on the farm at Aline and later moved to Woodward and Fairview. Hal died in 1954 at the age of 42. Roberta began working for Southwestern Bell Telephone Company as an operator in Fairview while in high school. She later transferred to Cherokee in 1960. Roberta and Harold McDowell were married in 1962 at the Cherokee Christian Church. Roberta and Harold were active in Mr. & Mrs. Sunday School Class and assisted in other church activities. Roberta was a trustee for three years, president of Promise group and held other CWF offices. Harold died in 1994 at the age of 74. Roberta continued living in Cherokee, while actively playing cards, dominoes and attending water-walking class with the “girls”. She was an active member of PEO, Eastern Star, American Legion Auxiliary, and helped with many church activities. She moved to Enid in 2013. Roberta took great pride in her family. They surprised her on her 80th birthday with a gather of friends and family. She is survived by her children, Coleen (Gary) Froemming, Linda Moore, Gary (Pam) Goode; nine grandchildren, who all considered Harold their Grandpa, Christine Coffman, Darren Froemming, Donelle Allison Wiechman, Kevin Allison, Cindy Norris, Aaron Goode, Angela Carroll, Sarah Kite, Justin Goode, 27 great grandchildren, 3 great-great grandchildren. Memorials may be made through the funeral home to First Christian Church CWF, Cherokee.

The family of Roberta June Henline Goode McDowell created this Life Tributes page to make it easy to share your memories.

Celebration of Life Service for Roberta McDowell, 97, will be...