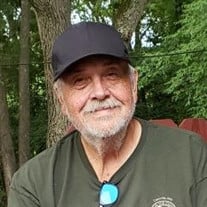 Celebration of Life Service for Rodney "Pawdad" Sims, 67 of Enid, will be Monday, August 17, 2020 at 10:00am in Anderson-Burris Funeral Home Chapel with Brian Meyer officiating. Cremation will follow the service under the direction of Anderson-Burris Funeral Home and Crematory. Rodney was born June 13, 1953 in Pratt Kansas to E.R. “Buss” and Vivian Sims, joining his brother Steve. Soon followed by brother Randy and sister Janice. Rodney died on August 13, 2020 in Enid. Growing up in Kansas and Texas as his dad was in the oilfield. Rod graduated from Spearman High School in 1971. Through his high school years, he hauled mud for rigs. He married Charla Hargas and their children are Christa and Clint. Rod entered the Marines as a Crew Chief on Helo and served till honorably discharged in 1975. He did a tour in Vietnam. Rod followed his dads footsteps and became a mud engineer. In 1982, he went on a blind date…and actually fell for Larissa Vaughan. They were married May 1982. Their first home was in Moore, Oklahoma then to Yukon, where he sold drilling pipe. The next move was to Enid to open a mud warehouse then the oilfield went bust. Before they left Enid for Vici, Oklahoma, their son Perry was born. Soon after moving to Vici, They welcomed daughter Darrah. In Vici, Rod worked for the City of Vici National Oil before going on the road as a long haul truck driver. In 1993, he was accepted into Votech A/P class with the goal to work at the base. After graduation, he got his foot in the door at Vance through lawn maintenance. Soon he was at eh flight line of the tweets. Rod was Senior Mechanic in Hanger 195 on the afternoon at the time of his death. When Rod wasn’t working, he was looking at scrapping videos and picking scrappy scrap up on the side of the road. He did golf in the oilfield days. Loved going fishing at Roaring River. Metal detecting was also a passion and going to the Casinos was his biggest. Rodney and Larissa had just celebrated 38 years of marriage. He will be greatly missed by his love, wife Larissa; daughter, Christa and Jimmy Cook of Amarillo, Texas, son, Clint and Sylvia Sim of Gruver, Texas, son, Perry and Carisa Sims of Enid, daughter, Darrah Sims of Enid; grandchildren, Halie, Marc, Lily, Henry, and Kinslea; great grandchildren, Cash and Noah; sister, Janice and Mark Thoman; brother, Randy Sims; other relatives and many friends.

Celebration of Life Service for Rodney "Pawdad" Sims, 67 of Enid, will be Monday, August 17, 2020 at 10:00am in Anderson-Burris Funeral Home Chapel with Brian Meyer officiating. Cremation will follow the service under the direction of Anderson-Burris... View Obituary & Service Information

The family of Rodney Earl "Pawdad" Sims created this Life Tributes page to make it easy to share your memories.

Celebration of Life Service for Rodney &quot;Pawdad&quot; Sims, 67 of Enid,...

Send flowers to the Sims family.