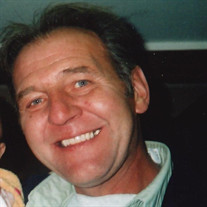 Roman Karel (pronounced Karl) Trnka was born in Prague, Czechoslovakia on February 10, 1956 to parents Vaclav Trnka and Karla Trnkova. A baby sister was stillborn when he was 6 years old and he had no other siblings. He graduated from High School in Prague, earned his Bachelor's degree in Mechanical Engineering and served in the Czechoslovak Air Force and was honorably discharged. Wanting to flee his Communist country, due to the hostile raids by the Russians and Germans, he applied for political asylum. His father was a Dentist and mother a Dental assistant, who were ordered to perform dental work for free at any time on the Communists or face unfortunate repercussions. He was detained for 9 months in a refugee camp awaiting acceptance for relocation to another country. In 1982, Roman was invited to the United States. He flew to New York City and within 3 days was assigned a host family which were located north of Enid. His hosts assisted him in housing, acquiring a job, making friends, shopping, and transportation. Roman had considerable respect and admiration for Vaclav Havel, the first President of the Czech Republic, who was a writer of Czech literature. He brought his mother, Karla, to Enid in 1986. Together, they traveled by car to almost all states and enjoyed sightseeing the fascinating distinguished terrains. Roman was employed at Great Lakes Carbon in Kremlin, Richill's Cafeteria, Gary's Roofing, O'Reilly's Automotive, Fed Ex as a contract driver, NAPA Automotive Parts and Braum's. He enjoyed learning the English language, golfing, tennis, cooking and spending time with close friends. He loved watching documentaries on Eastern and Western European culture, politics and the arts. Roman attended many operas, art galleries and famous restaurants in Europe. Some of the languages Roman spoke were Italian, Czechoslovakian, German, Polish, Romanian, English and French. Roman enjoyed his Budweiser beer and educating people of its origin which was in a small Czech brewery, Budvar, near his home, then later in Belgium. Roman was preceded in death by his parents and many aunts, uncles, and cousins. Roman passed away on Sunday February 14, 2021 in Enid. Survivors include his close personal friends Mary Morgan, Stephanie Garner, Ginny Garner Carter and Benjamin Garner. His canine friends meant comfort to him. Memorial donations may be made to St. Francis Xavier Catholic Church c/o "Good Samaritan Fund" or Park Avenue Thrift. Cremation arrangements are by Anderson Burris Funeral Home and Crematory. Cards may be sent to 2313 Singletree Lane, Enid, OK 73703. Special thanks go to Deacon Tony Crispo at St. Francis Xavier Church, where Roman attended services, as well as friends and acquaintances who advocated for Roman in his times of need.

Roman Karel (pronounced Karl) Trnka was born in Prague, Czechoslovakia on February 10, 1956 to parents Vaclav Trnka and Karla Trnkova. A baby sister was stillborn when he was 6 years old and he had no other siblings. He graduated from High... View Obituary & Service Information

The family of Roman Karel Trnka created this Life Tributes page to make it easy to share your memories.

Send flowers to the Trnka family.