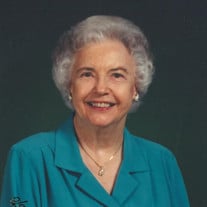 Celebration of Life Service for Mary Ruth McElroy, 100 of Enid, will be 2:00 pm Tuesday, January 12, 2021 in Anderson-Burris Funeral Home Chapel with Jeff Jackson officiating. Burial will follow in the Fairview McKeeman Cemetery near Medford, under the direction of Anderson-Burris Funeral Home. Mary Ruth was born April 8, 1920 on a farm near Jefferson, OK to Elmer Clyde and Mary Lelia (Mamie) Cole McKeeman and passed away Wednesday, January 6, 2021 at The Commons in Enid. She rode a school bus to Jefferson School from first grade through high school. After graduating from Jefferson High School in 1938, she attended junior college in Tonkawa, OK and earned a teaching degree from Northwestern State College in Alva, OK. Ruth had a long career as a teacher. She first taught two years in rural schools in Oklahoma then moved to California where she taught elementary grades in Sacramento, California. She married Richard D. McElroy on June 20, 1954. They lived in California until 1989 when they moved to Enid, OK to be closer to family. Ruth enjoyed helping and serving others through her various mentorships, tutoring, social groups, and service organizations. She was a charter member of Sierra Christian Church (Disciples of Christ) in Loomis, CA. In retirement, she enjoyed genealogy and was a charter member of the Daughters of the American Revolution in Roseville, CA, later transferring to the Enid DAR Chapter. Ruth also belonged to the Robert Coe Chapter, Colonial Dames XVII Century and Oklahoma City Chapter Daughters of 1812. Ruth was preceded in death by her husband, Richard, brothers, Elmer, Harold (infant), and Lester. She is survived by her sister, Julia Esther Welch of Wichita, KS, nine nieces and nephews, and many members of their families. Memorials may be made through the funeral home to the Fairview McKeeman Cemetery.

The family of Ruth McElroy created this Life Tributes page to make it easy to share your memories.

Celebration of Life Service for Mary Ruth McElroy, 100 of Enid,...

Send flowers to the McElroy family.