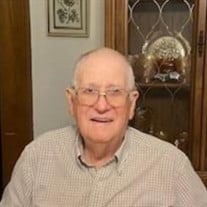 Sam Leonard Ramer was born in Geary, Oklahoma on August 1st, 1933, to Leonard and Vera Kern Ramer. The third of eight children, he grew up near Watonga where he attended public school and worked alongside his father on the family farm. At the age of twenty, he married Doris Waggoner on February 27, 1954, the couple making their home in Enid later that year. In 1962, Sam and Doris Ramer acquired a small acreage north of Enid where they raised and maintained an active barnyard of cows, pigs, horses, chickens, turkeys, a sizeable vegetable garden and five children. Sam Ramer worked in Enid in the automotive business for over 65 years. He ran both Texaco and Apco service stations in Enid in the late 1950s to the mid-1960s. In 1967, he opened an auto salvage near downtown which he operated until his recent passing. Sam was an active churchgoer and longtime deacon and Sunday school teacher at Calvary Baptist Church in Enid. He was ordained as a Baptist minister in 1983 and worked to construct and establish the First Baptist Church in Longdale, Oklahoma where he served as pastor for several years. More recently, he enjoyed teaching and sharing the Gospel with others at Your Family Church in Enid. Sam Ramer lived a long and active life. He enjoyed friendships in the thousands. He maintained a tireless work ethic even in his last days. He always made time for family and friends, however, and perhaps to fish a little, especially in the high mountain streams of Colorado. He was known by many, admired by some and loved by all who had the privilege to get to know him. He is survived by his wife Doris Ramer, daughters Marcia Wright and Roxanna Armstrong and her husband Anthony, sons Richard Ramer and Randy Ramer, 14 grandchildren, 25 great-grandchildren, two great-great grandchildren, three sisters, Donna Hopkins, Jean Hall and Maude White, and two brothers, Jack and Dick Ramer. He was preceded in death by brother, JC Ramer; and sister Naomi Fitzsimmons; son Sam L. Ramer, Jr; and grandson Jared Gaines. Funeral service will be held at 2:00 p.m. Monday, March 14, 2022, Anderson-Burris Chapel. Burial in Memorial Park Cemetery. Memorial donations can be made to Hospice Circle of Love in Enid. Condolences may be made online at www.andersonburris.com.

Sam Leonard Ramer was born in Geary, Oklahoma on August 1st, 1933, to Leonard and Vera Kern Ramer. The third of eight children, he grew up near Watonga where he attended public school and worked alongside his father on the family farm. At... View Obituary & Service Information

The family of Sam Leonard Ramer created this Life Tributes page to make it easy to share your memories.

Send flowers to the Ramer family.