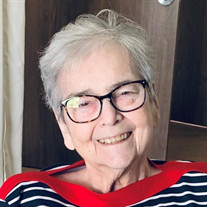 SANDRA KAY HICKLE – Sandra K. (Smith) Hickle, 80, who loved to be called “Grandy”, passed away unexpectedly on July 28, 2021 in Baytown, Texas. She was born May 17, 1941 in Oklahoma City, OK, to Cecil K. Smith and Evelyn Marie (Brown) Smith. Sandra’s childhood was spent in Chanute, Kansas and Coffeyville, Kansas where her father worked for the railroad. She had several childhood friends that she remained in contact with throughout her life. After her father’s unexpected death in 1955, the family moved to Stillwater, Oklahoma where Sandra attended high school graduating in 1959. She continued her education at Phillips University in Enid earning a Bachelor’s degree in Business. Sandra began her career as an educator at Central Vo-Tech in Drumright, Oklahoma where she was a beloved business education teacher. Her professional journey led to a long and successful career as a distinguished Human Resources Legal Administrator for many renowned law firms in Houston, Cleveland, Ohio, and Washington, DC. She served as an officer in the Association of Legal Administrators in Houston. In 1960, she married Benny Bunch and they had two daughters. In 1972, she married Curt Hickle of Garber, Oklahoma and they remained married for 35 years until his death. Curt and Sandra were devoted members of the Disciples of Christ Church. Together, they were involved in ministry work and found joy helping others. Sandra loved spending time with her family, reading the Bible, playing the piano, singing spiritual hymns, and sharing her faith with others. She was an inspiration to many with her giving, loving, and gentle spirit. Everyone who knew Grandy adored her, not just her own grandchildren, but her extended family, and all the young hearts she touched. She will be sorely missed by all. In addition to her parents, she was preceded in death by her husband in 2007. Survivors include her daughters, Bonnie Bunch Dean and her husband Don of Spring, TX, Barbara Bunch Ponder and her husband Johnnie of Mont Belvieu, TX; 7 grandchildren, Pam Davis, Justin Ponder, Tyson Hickle, Derek Hickle, Lauren Charbonneau, Jacob Ponder, and Austin Dean; 15 great grandchildren; one brother, Steve Smith of Ft. Worth, TX and one sister, Linda Nichols of Enid; many nieces and nephews. Visitation with the family present will be held at Anderson-Burris Funeral Home, at 1:00 p.m. on Saturday, August 7, immediately followed by a service of remembrance starting at 2:00 p.m. Interment will be at Memorial Park Cemetery, Enid, OK. Those who wish to remember Sandra in a special way can make gifts in her memory to the Interfaith Ministries of the Woodlands at 4242 Interfaith Way, The Woodlands, Texas 77381 with her name on the memo, or online at https://bit.ly/InterfaithGift.

The family of Sandra Kay Hickle created this Life Tributes page to make it easy to share your memories.

Send flowers to the Hickle family.