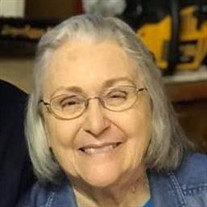 Celebration of Life Services for Shirley Click will be August 31, 2019 at 2:00 pm in Calvary Baptist Church with Reverend Steve Williams officiating. Cremation arrangements are by Anderson-Burris Funeral Home and Crematory. Shirley was born on June 9, 1935 in Stilwell, Oklahoma to Alva Jefferson and Helen (Jenkins) Emerson and died on August 4, 2019 in Enid. She grew up in Oklahoma and Kansas. Shirley started college in Chickasha and transferred to Stillwater, where she met Howard Click. She graduated from Oklahoma State University. On November 3, 1957, Shirley and Howard married in Oklahoma City. They lived all over the continental United States and Hawaii, with Howard’s U.S. Naval career. Following his military retirement, they went into ministry and lived in Texas, Kansas, and Oklahoma. They moved to Enid in 2000. She was the family secretary and was an avid photographer, scrapbooker, and enjoyed studying her Bible. Shirley was an active member of Calvary Baptist Church. She was preceded in death by her parents, who died when she was young; and her aunt and uncle, who raised her after her parents death, Gussie and True Emerson. Shirley is survived by her husband, Howard; six children, Helen Webster (Bob), Judy Rangel, Ruth Ann Replogle (Steve), Tim Click (Megan), Amy Carney (Tom), Matt Click (Jamey); 8 grandsons, nine great grandchildren; one brother, Charles Emerson (Delores); cousin, Patt “PJ” Smith (Carroll); brothers-in-law, Howard Parks, Roy Good (Glennda); sisters-in-law, Bess Kessler and Evelyn Dunbar; other relatives and many friends. In lieu of flowers, memorials may be made to Calvary Baptist Church Mission Fund.

The family of Shirley Ann Click created this Life Tributes page to make it easy to share your memories.

Celebration of Life Services for Shirley Click will be August...