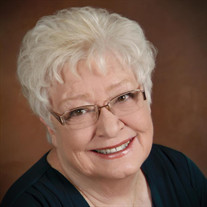 Celebration of Life Service for Suzanne “Suzi” Powell, 75 of Enid, will be 10:00 A.M. Thursday, December 30, 2021, in Central Christian Church with Rev. Tom Stanley and Rev. Don Johnson officiating. Cremation arrangements are under the direction of Anderson-Burris Funeral Home and Crematory. Suzi was born July 25, 1946 in Enid to Wilma and Ernie Powell and passed away Friday, December 24, 2021 in Enid. She attended Enid Public Schools graduating from Enid High School in 1964. In 1965, her daughter, Kimberly was born. Suzi attended Phillips University and the University of New Orleans. She was a certified Red Cross Water Safety Instructor and taught hundreds of children and adults to swim. While living in New Orleans in the late 1960’s she was the Aquatic Director for the Eastern New Orleans YMCA, formed and coached it’s first competitive swimming team which place 3rd. in the region during it’s first year. She was very proud of her team. Suzi was hired at the Enid YWCA in 1976 as the Adult Program Director. She helped to establish the first domestic violence shelter program from 1979 until retiring in 2006. She established the first 24 hour services and shelter program for victims of sexual assault in Enid. She established the YW’s Substance Abuse Residential and Recovery Program. During her tenure as Women’s Services Director at the YWCA, she served as a founding member of the Oklahoma Coalition Against Domestic Violence and Sexual Assault. The coalition continues to serve the state today with it’s many services. She served as Chair of the Coalition during three different terms. She served on the Oklahoma State Child Death Review Board, the violence advisory committee, worked with legislators to enact the Victim’s Protective Order Act, the federal Victim’s of Crime Act, and the Violence Against Women Act. She worked as an on-call Branch Office Assistant for an Edward Jones branch. She was an active member of Central Christian Church and served as a deacon and on the worship and community services committees and volunteered in different capacities. Suzi enjoyed hosting family gatherings, gardening, baking goodies for family, neighbors, and friends, and fishing. She was preceded in death by her parents, her husband Danny Baker, the love of her life, her daughter, Kimberly Rogers and grandson, John Zobisch. She is survived by her grandchildren, Josh Zobisch of Oklahoma City, Ronni and Misael Herrera of Medford, OK, Kathryn Hernandez of Moore, OK. Rose Zobisch of Enid, OK, her favorite cousin, Barbara Jones of Garber, OK, great-grandchildren, Aryanna and Cameron Zobisch, Parker, Joslyn and Addilyn Zobisch, Lilyana, Hayzlee, and Vivian Herrera, Christian Hernandez, and Georgia and Emma Campbell. Memorials may be made through the funeral home to Central Christian Church or Enid SPCA.

The family of Suzanne "Suzi" Ruth Powell created this Life Tributes page to make it easy to share your memories.

Celebration of Life Service for Suzanne “Suzi” Powell, 75 of...

Send flowers to the Powell family.