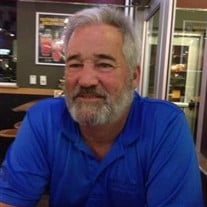 Terry George Driskill, age 67, passed away peacefully on April 2, 2022, surrounded by his immediate family. He was born on December 14, 1954, in McCamey, Texas to Sarah E. Driskill and Fred H. Driskill. He spent his early years in, and around, the Cleo Springs and Aline, OK area. He graduated from Aline-Cleo High School in 1973. While in high school he learned his basic trade skills in welding through the Vocational-Technical system. After High School, Terry worked as a welder at Red’s Construction Company, Ringwood, Oklahoma, gaining experience in oil field welding and metals fabrication. In 1975, he went to work at M&O Welding, in Enid, OK. After numerous years, enhancing his skills, Terry was able to purchase the business in 1989, re-branding it as Driskill Welding. In 1974, after having been friends for most of their lives, Terry married the love of his life, Darla. They established a home in Enid, OK in 1976, where they still maintain a home. In 1982, Terry and Darla welcomed a new addition into their life, a loving son, Eric. Terry was an avid softball player and golfer. He loved playing golf on the weekends with his son and his best friends. Another passion that he shared with his son, and numerous friends was competing in Bar-B-Que Cooking Competitions from locally at the Enid Moose Lodge, where he was a member, to as far away as the Houston Livestock Show & Rodeo Cook-off in Texas. He is survived by his wife, Darla Gayle (Swart) Driskill, his son Eric Cole Driskill, both of Enid, OK, three brothers, Don Waymon Driskill and wife Bonnie of Guthrie, OK, Gary Lynn Driskill and wife Jeannie of Cordell, OK, and his twin brother, Jerry Fred Driskill and wife Teressa of Oklahoma City, OK. He is survived by many nephews and nieces. A Celebration of Life will be held at the Moose Lodge, 302 E. Purdue, Enid, OK 73701 at 1:00PM, on April 16, 2022.

Terry George Driskill, age 67, passed away peacefully on April 2, 2022, surrounded by his immediate family. He was born on December 14, 1954, in McCamey, Texas to Sarah E. Driskill and Fred H. Driskill. He spent his early years in, and around,... View Obituary & Service Information

The family of Terry George Driskill created this Life Tributes page to make it easy to share your memories.

Send flowers to the Driskill family.