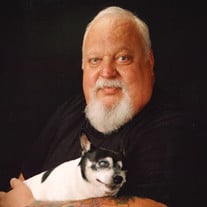 Celebration of Life Service for Terry Smith will be Monday, July 20, 2020 at 10:00 a.m. in Anderson-Burris Funeral Home Chapel with Butch Phillips officiating. Private family burial will be at a later date in Elmwood Cemetery, Woodward, Oklahoma. Terry Lee Smith was born June 2, 1953 in El Dorado, Kansas to Harry and Thelma (McDonald) Smith. On July 15, 2020 He passed peacefully surrounded by his wife and children in Edmond, Oklahoma. Terry attended school in Kansas and graduated from El Dorado High School in 1971. In 1975 he married Jo Lynn (Washington) and they made their home in Enid where they raised their children and owned and operated Sonic Drive Ins and other restaurants. Over the years Terry mentored many young people through his work with Sonic. He was a generous boss and quick to forgive and offer second chances. He retired in 2015. Terry loved hot rods and traveling to car shows with his 1950 Chevy Sedan delivery. His Model A was his pride and joy because it was something he shared with his dad. He enjoyed fishing and hunting with his uncles and cousins in Sharon, Oklahoma. He did magic tricks for his nieces and nephews, earning him the nickname “Magic Man.” Many people knew him for his love of tattoos. He liked them to be bold and colorful, and he enjoyed the hours he spent in the chair with his artist, Dennis McPhail, where they would swap stories all day. He had a love for terrier dogs that started with his childhood pet, Sparky. After the passing of his second terrier named Sparky, he decided to bring home Dolly, who was his faithful and loving companion until the end. Terry was blessed to have all his children close to home, and he spent time with them frequently. He and Jay worked on numerous projects together over the years, from working on cars to building his shop. He loved hosting his friends in the shop on Saturday mornings where they drank coffee and talked cars. In his retirement he moved in two houses down from Jill and Johnathan, where he could put on his hat, grab his favorite lawn chair, and walk over for a cookout. Most evenings you could find him at home with Jo, watching NCIS and enjoying a Jack & Coke. Terry is survived by his wife Jo, son Jay Smith, son Tim Smith, daughter Jill (Smith) Tietz and son-in-law Johnathan, granddaughters Shelby Smith and Alyssa Smith, great grandson Xander Smith, his niece Lea Ann, her husband Darold Malchaski, and their daughter Meredith, sister Carla Watkins, and many dear friends and relatives. Terry is preceded in death by his parents, Harry and Thelma Smith, and his grandson, Hunter Smith. Memorials to Vietnam Veterans Memorial Fund through Anderson-Burris.

Celebration of Life Service for Terry Smith will be Monday, July 20, 2020 at 10:00 a.m. in Anderson-Burris Funeral Home Chapel with Butch Phillips officiating. Private family burial will be at a later date in Elmwood Cemetery, Woodward, Oklahoma.... View Obituary & Service Information

The family of Terry Lee Smith created this Life Tributes page to make it easy to share your memories.

Celebration of Life Service for Terry Smith will be Monday, July...