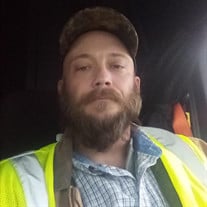 Celebration of Life Service for Terry Gene Williams II, 38 of Enid will be 10:00AM, Friday, June 18, 2021 at Evangel Assembly of God with Pastor Lester Lowry officiating. Cremation arrangements are with Anderson-Burris Funeral Home and Crematory. Terry was born September 30, 1982 in Alva, OK to Terry and Barbara (Cunningham) Williams and passed away suddenly Sunday, June 13, 2021 in Enid. He received his GED in Oklahoma City. Terry was a hardworking truck driver hauling produce and cargo all over the U.S. He always had his trustworthy German Shepard and companion Tuff with him. Terry never went anywhere Tuff couldn’t go. He had a green thumb and was quite the handyman, nothing was too challenging for him. He loved the outdoors, fishing, weekend adventures and garage and estate sales. Terry was a kind and generous person, always willing to go above and beyond to help others. You would see him mowing his neighbor’s lawns in the summer and clearing snow in the winter. Above all, Terry loved the Lord. Terry is survived by his parents, Terry and Barbara Williams of Enid; sisters Stephanie Munoz of Fort Mill, South Carolina, Amanda Mwok of Mobile, Alabama, and Jennifer Tingley of Oklahoma; brother Brian of Enid; 18 nieces and nephews; 6 great nieces and nephews; many other relatives and friends and his best friend for 25 years, Winomie Esterline. Terry was preceded in death by his maternal grandparents Lawrence Cunningham, Dale and Pearl Shelton, paternal grandparents Elmer Ray Williams and Betty Williams, aunt Sherry Ross, uncle Bill Ross, uncle Robert Olson, cousins Chris Cunningham, Tommy Ross, and Rhonda Martinez, and his faithful dog Tiger. We know they had an amazing reunion on Rainbow Ridge. Words cannot express how deeply missed Terry will be. In lieu of flowers and for those wishing to remember Terry’s generosity and love make donations to Our Daily Bread food mission with Anderson-Burris acting as custodians of the funds.

Celebration of Life Service for Terry Gene Williams II, 38 of Enid will be 10:00AM, Friday, June 18, 2021 at Evangel Assembly of God with Pastor Lester Lowry officiating. Cremation arrangements are with Anderson-Burris Funeral Home and Crematory.... View Obituary & Service Information

The family of Terry Gene Williams II created this Life Tributes page to make it easy to share your memories.

Celebration of Life Service for Terry Gene Williams II, 38 of...

Send flowers to the Williams family.