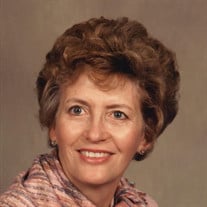 Thelma Jean Davis Dykstra was born on August 26, 1936 in Trinidad, Colorado to Earl Davis and Beulah Pearl Montgomery Davis. She was welcomed home by her older siblings, Lloyd, Syble and Allen. The family was later joined by brothers Roy and Jim to be followed by her baby sister Lois. Jean attended a one room school house near her childhood home until her high school years. She graduated from high school at the age of 17 in 1953 from Kim High School in Kim, Colorado. She then ventured away from home to live with friends and work at the Antlers Hotel in Colorado Springs. Her adventurous spirit led her and dear friend, Janice to work on a dude ranches in Tucson, Arizona and then in Jackson Hole, Wyoming. She later moved back home and went to cosmetology school. She loved making the elderly woman beautiful for 20 years at the Grace Manor Nursing Home before deciding to retire. On May 31, 1959 she married Orville Jones in LaJunta, Colorado. To this union two children were born, LuAnne on October 9, 1960 and Warren on September 27, 1961. She was the best mother they could have ever asked for. On March 13, 1981 Jean married Harold Dykstra. She embraced his family and five children and called them her own. They enjoyed 39 happy years together and enjoyed traveling, camping and loved nature. Jean was an amazing homemaker and had a gift of hosting family and friends. Jean and Harold were involved in many ministries over the years. She was a part of Women’s Aglow, Full Gospel Businessmen’s Fellowship and Cattlemen for Christ. She was very creative. Her hobbies were oil painting, gardening, sewing, and quilting. She cherished spending time with her grandchildren and great grandbabies. Her grandchildren call her the best grandma you could ever ask for and the most wonderful woman in the world. She answered to Nanny, Nana and Grandma Jean. In October of 2012 they sold their ranch in Colorado to relocate in Ames, Oklahoma. They immediately became involved in the local church, bible study groups and community. Jean was loved by all who knew her and described her as the salt of the earth and a light shining for Jesus. Jean was preceded in death by her parents, her in laws, brothers, Lloyd Davis, Roy Davis, sister, Syble Glover and granddaughter, Amber Richie. She is survived by her husband, Harold, children, LuAnne Detrick (Steve), Warren Jones (Terri), Rick Dykstra, Carmen Huckeba, Kathy Richie (Jeff), Lavon Ellefson (Doug) and Rob Dykstra (Mililani) and 11 grandchildren and 12 great grandchildren. Celebration of Life Services will be held at the Ames Christian Church at 10:30 a.m. in Ames Oklahoma on September 25, 2020 and at the Community of Christ Church at 11 a.m. on October 3, 2020 in Seibert, Colorado. Cremation arrangements by Anderson-Burris Funeral Home and Crematory. In lieu of flowers, the family requests memorial donations be made in care of the Ames Christian Church, P.O. Box 586, Ames, OK. She was passionate about the ACC Youth and Hope for the Homeless.

Thelma Jean Davis Dykstra was born on August 26, 1936 in Trinidad, Colorado to Earl Davis and Beulah Pearl Montgomery Davis. She was welcomed home by her older siblings, Lloyd, Syble and Allen. The family was later joined by brothers Roy and... View Obituary & Service Information

The family of Thelma Jean Dykstra created this Life Tributes page to make it easy to share your memories.

Send flowers to the Dykstra family.