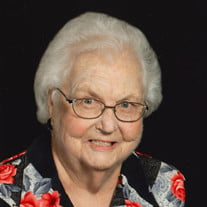 The Celebration of Life for Thelma Ruth Smith 88, will be 11:00 am, Friday, January 10, 2020, at New Hope United Methodist Church, with Rev Emily Robnett and Rev Asia Frye officiating. Arrangements are under the direction of Anderson Burris Funeral Home. Burial will be at a later date in Elmwood Cemetery, at Woodward, Oklahoma. She was born January 7, 1931 on a farm near Sharon, Oklahoma and died Monday, January 6, 2020. She graduated Sharon High School in 1948. She was employed as a telephone operator for Southwestern Bell in until 1952. On June 14, 1952 she married in Harry L. Smith in Woodward, Oklahoma. They made their home in Wichita and El Dorado, Kansas until 1974 when they moved to Enid, Oklahoma. They were owner/operators of Sonic Drive Ins for 40 years. As they retired, they enjoyed their winters golfing at Citrus Valley in Edinburgh, Texas. While there, she taught over 100 friends how to cro hook, a type of crochet. She was an active member of New Hope Methodist Church where she started a group, the Lunch Buddies. Surviving are her son and his wife, Terry and JoLynn Smith, and her daughter Carla Watkins; five grandchildren, Jay Smith, Tim Smith, Chad Watkins, Kari Watkins Bundy and husband Adam Bundy, and Jill Smith Tietz and husband Johnathan Tietz. Five great grandchildren, Shelby Smith, Alyssa Smith, and Gwendolen, Caroline and Vaughn Bundy, and one great, great grandson, Xander Smith. Also surviving are two brothers and their wives, Jack and Lovella McDonald, and Dick and Margaret McDonald, and two sister-in-laws, Joyce McDonald and Mike McDonald. Thelma is also survived by a lot of special nieces and nephews. She was preceded in death by her parents, Harvey and Hazel McDonald, her husband Harry L. Smith, five brothers, Johnny and wife Maxine, Joe and wife Fairlene, Gene, Kenny, and Bill McDonald, and her only sister, Velma Lee Griffith, and one great grandson, Hunter Smith. Memorials may be made to New Hope United Methodist Church, 614 N. Garland, Enid Oklahoma, 73703.

The Celebration of Life for Thelma Ruth Smith 88, will be 11:00 am, Friday, January 10, 2020, at New Hope United Methodist Church, with Rev Emily Robnett and Rev Asia Frye officiating. Arrangements are under the direction of Anderson Burris... View Obituary & Service Information

The family of Thelma Ruth Smith created this Life Tributes page to make it easy to share your memories.