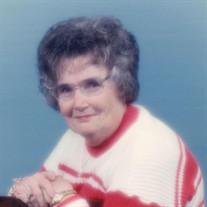 Graveside service for Thelma Yvonne Beasely Fain Wiles, 85 of Enid, will be Tuesday, December 7, 2021 at 2:00 pm in Memorial Park Cemetery. Arrangements are under the direction of Anderson-Burris Funeral Home. Thelma was born January 30, 1936 in Wilburton, Oklahoma to Glenn and Demma (Johnson) Beasley and passed away on December 3, 2021 in Enid. Thelma lived most of her younger years living in California, where her dad found work. She married Wayne Junior Fain in 1954 and they had two sons, Allen and David. In 1959, Thelma and her two sons moved to Oklahoma. She met and married Herb Wiles in Healdton, Oklahoma in August 1960. They lived in several cities in Oklahoma since Herb was working on road construction. They settled in Enid in 1969. Thelma worked at Virginia B’s Dress Shop from 1979 until Virginia closed the store in 1987. After that she worked at Crown Fashion for a short time. She liked the OU Sooners and Dallas Cowboys. Thelma’s favorite pastime was getting on her laptop and working crossword puzzled. She fixed the hummingbird feeders every years, but didn’t have to many visitors. She was preceded in death by her parents and daughter-in-law, Sandie Fain. Thelma is survived by her husband, Herb of the home; two sons, Allen Fain and fiancé Kim Salladay and David Fain and wife, Tammie; three granddaughters, Vanessa Fain, Suzy Hadden and husband, Tommy, and Michele and husband Brian Crittenden; 3 great grandsons, Tyler Anderson, Thomas and Kaleb Cunningham; 2 great granddaughters, Ellie Cunningham and Ava Hadden; brother, Claude “Sonny” Beasley; other relatives and friends.

The family of Thelma Yvonne Wiles created this Life Tributes page to make it easy to share your memories.

Send flowers to the Wiles family.