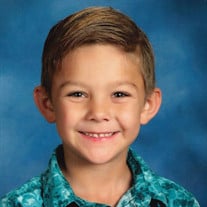 Titus Alexander Kennedy entered this world in true Titus fashion on June 16th 2016. A hundred miles an hour. He had no time to wait on his Gi and Grandpa to get there. Aunt Mariah took charge and got his mom to the hospital with little time to spare. He took Heaven by storm on Tuesday, March 15 2022. Titus was a little man who lived his full life in 5 short years. Or 5 ½ according to him. He was constantly on the move but always had time to stop and give a hug and some love to everyone he knew. And a whole bunch of people he didn’t know. No one was a stranger to Titus. You can only imagine him in heaven running up to hug his Uncle Jason, cousin Bryce and of course Pastor Tony Weston. He had a lot of passions in life. He could recite facts about every species of dinosaur, was an avid fan of Spiderman and most off the superheros and thanks to his other dad Terry, MMA and boxing was his latest endeavor. A carton of strawberries didn’t stand a chance when he was around. Yes he was full of energy and drove his teachers a little crazy and yes, mom, grandpa and aunt Mariah made more than one unscheduled trip to school to escort him home earlier than expected. But one Titus hug and everything was forgotten. He had a way of melting your heart with that ornery grin. His dad Cori was his true life superhero. He loved the time he was with him and everyone had to hear every detail when he came home. Left here to carry on his mission of love are him mom Madison Shaffer and Terry Reading, big sister Aspen, his dad Cori Kennedy, his “G” Lucinda Shaffer, grandpa Jeff Shaffer, aunt Mariah Shaffer, fiancé Frank Bruno and cousin Barrett Sierra, Uncles Jadon and Jace Shaffer. Also great grandparents Rod and Bonnie Shaffer, Delbert and Waynona Covalt. Great uncle Jim and Aunt Lana Shaffer and Kensli, Great Aunt Lanae Covalt and Great uncle Lonnie Covalt and Karen along with a host of cousins and friends. A celebration of Life will be held Tuesday March 22 at 2:00pm at World Harvest Church, 1417 S. Garland Road. Services under the direction of Anderson-Burris Funeral Home and Crematory.

Titus Alexander Kennedy entered this world in true Titus fashion on June 16th 2016. A hundred miles an hour. He had no time to wait on his Gi and Grandpa to get there. Aunt Mariah took charge and got his mom to the hospital with little time... View Obituary & Service Information

The family of Titus Alexander Kennedy created this Life Tributes page to make it easy to share your memories.

Send flowers to the Kennedy family.