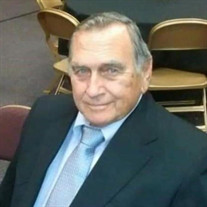 Change of Date of Service!!! Graveside service for Otis “Tokey” Dinsmore, 82, of Enid, will be 10:30AM Saturday, October 31, 2020 at Oakwood Cemetery in Wewoka, Oklahoma with Rev. Dan Heath officiating. Visitation with the family will be Tuesday evening 5:00 PM to 7:00 PM at Anderson-Burris Funeral Home. Tokey was born March 15, 1938 in Wewoka, Oklahoma to Albert Henry and Edna Jane (Dunafon) Dinsmore and passed away on Tuesday, October 20, 2020 in Oklahoma City. Tokey graduated from Wewoka High School and went to work in the oilfield in Odessa, Texas. He married Carol Austin and they had two sons Jeff and Steve. He then worked in Wyoming, Texas, Oklahoma, Utah, Colorado, and New Mexico in the oilfield. Tokey then moved to Louisiana where he owned a mattress business. On November 1, 1978 Tokey married Frankie Eeds in Rockwall, Texas and they had a daughter Hollie. He then worked as a cross country truck driver. In 1997 they moved to Enid and he began working at Rite Way Construction where he was still employed at the time of his passing. Tokey was a fabulous father and grandfather and an excellent friend that will truly be missed by everyone that knew him. Tokey is survived by his children Steve and wife Nancy Dinsmore of Durant, and Hollie and husband Michael Schoonover of Enid; 18 grandchildren; 28 great grandchildren; brother Pete and wife Sherry Dinsmore of Enid; sisters Laura Good and Glenda Collins both of Enid. He was preceded in death by his parents, wife Frankie, son Jeff Dinsmore, stepson Bud Conyers, brother James, sisters Moni, Bertie, Billie, Betty, Blanche and several nieces and nephews.

Change of Date of Service!!! Graveside service for Otis &#8220;Tokey&#8221; Dinsmore, 82, of Enid, will be 10:30AM Saturday, October 31, 2020 at Oakwood Cemetery in Wewoka, Oklahoma with Rev. Dan Heath officiating. Visitation with the family... View Obituary & Service Information

The family of Tokey Dinsmore created this Life Tributes page to make it easy to share your memories.

Change of Date of Service!!!
Graveside service for Otis “Tokey”...

Send flowers to the Dinsmore family.