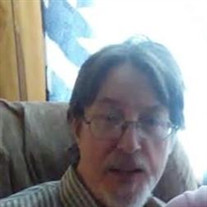 Walter LeRoy Gamble was fondly known as “Monk” to his nieces and nephews. He was born October 1, 1957, to Walter Earl Gamble, Jr., and Coral Lee Laymon Gamble, in Enid, OK, and went to be with God on October 25, 2019. Walter was a natural born caretaker, and cared for all that knew him. He helped raise his niece, Amanda Gamble, and then her daughter, Rosalynn Gamble. Walter graduated from Enid High in 1976 and Phillips University in 1980. He later earned a PhD in Divinity. Walter was a substitute teacher at Enid High School. He worked for Enid Group Homes until he had to medically retire. In his retirement, he performed numerous weddings and funerals. As a child, Walter was raised as a military dependent. He lived in Bermuda, Clinton-Sherman AFB OK, Little Rock AFB AR, and England AFB LA. Geology and theology was important in his life. He was an avid admirer of rocks as a member of both the Enid Gem and Mineral Society and the Rough and Tumbled Rock and Gem Club of Ponca City, Oklahoma. Walter was an active member of Faith Lutheran Church. Walter was preceded in death by his grandparents, parents, and brother, Daniel Paul Gamble. He is survived by his fiancée, Joy Wooten, sister, Judy Nowak and husband Stan, his brother, Robert Gamble and wife Meena, and many nieces and nephews. He will be missed greatly. Graveside services will be held at 2:00 P.M. Tuesday, November 5, 2019, at Waynoka Cemetery officiated by Pastor Peter Olson. Cremation arrangements are with Anderson-Burris Funeral Home & Crematory.

The family of Walter LeRoy Gamble created this Life Tributes page to make it easy to share your memories.

Walter LeRoy Gamble was fondly known as “Monk” to his nieces...

Send flowers to the Gamble family.