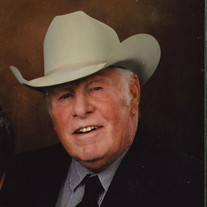 William E. “Bill” Barnes completed his final earthly ride on Friday, Feb. 21, 2020. Bill was born on June 5, 1938, in Okeene, OK, to Edward A. Barnes and Violet Haigler Barnes Stephenson. He graduated from Okeene High School in 1957. Bill was employed by U.S. Gypsum for seven years. On June 6, 1965, Bill was united in marriage with Karen L. DeHaas. They made their home in Ames. Bill was a cowboy through and through. Gathering cattle, roping, raising quarter horses and farming fulfilled him. He was employed by Enid Livestock Sales and for 30 plus years at Fairview Sale Barn. Bill was a member of the American Quarter Horse Association and completed auctioneer school in 1969. Bill was known for his laughter, pitch playing, love of family, dancing, traveling and fishing. He and Karen loved cruises and their fishing trips to Branson and the mountains in the summer. Bill leaves his wife, Karen; sister, Marilynn “Bunnie” Bond of Okeene; brother-in-law, Daryl DeHaas and Roby of Ames; his sister-in-law, Sheila Bisel and Darin of Canon City, CO, and exchange student Delcides Junqueira and family of Brazil; numerous nieces and nephews; cousins, and friends. He was predeceased by his parents, in-laws Leon and Ruby DeHaas; and brother-in-law, Gregg Bond; aunts and uncles. Graveside services will be at 11 a.m. Saturday, Feb. 29 at Ames Cemetery under the direction of Anderson-Burris Funeral Home with Jerry Mason officiating. Memorials may be made to the Ames Fire Department or Ames Cemetery. Ride, Cowboy, Ride.

The family of William E. "Bill" Barnes created this Life Tributes page to make it easy to share your memories.

Send flowers to the Barnes family.