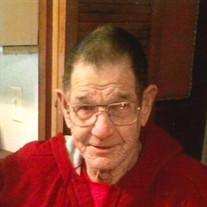 Graveside service for William Stewart, 87 of Ringwood, will be 10:00 AM, Monday, July 22, 2019 at the Freehome Cemetery outside of Ringwood, with Chaplain Laura Nell Hays officiating. Arrangements are by Anderson-Burris Funeral Home & Crematory. William was born April 19, 1932 in Freedom, OK to Charles and Thelma (Province) Stewart and passed away on July 18, 2019 at the Veteran’s Center in Clinton, Oklahoma. William graduated from Freedom High School and entered the United States Air Force on January 6, 1951. He was stationed at Lackland Air Force Base for training, then went to Fort Sill for bakery training. His first assignment was at O’Hair Field in Chicago, then to Langley Air Force Base in Virginia. Then in November of 1951 he was moved to Camp Kilmer in New Jersey, before he was transferred to Paris France. William was drafted to be a catcher for the St. Louis Cardinals in 1952 right after he reupped in the Air Force for seven years. In 1952 he went to Lyon France Air Force Base until November of 1954 when he was sent to Germany. William was sent by troop ship to New York and went to McGuire New Jersey for 6 months then to Sandia Base New Mexico for 3 years. He was stationed in Monzano Base New Mexico then he went to McKinley Air Force Base in Bermuda. He left in 1965 and went to McDiel Air Force Base in Florida, then to Thailand in 1967. He was then stationed at Clark Air Force Base in the Philippines and transferred to Vietnam. He then served the remainder of his time at George Air Force Base in California. William retired from the service in February of 1971. William loved to play baseball, football, softball, track, and volleyball during his time in the service. On July 1, 1979 William married Glendene Wiggins in Ringwood at the First Untied Methodist Church. William was a member of the First United Methodist Church. William was preceded in death by his parents, son Jim Stewart, 2 grandchildren, brother and sister. He is survived by his wife, Glendene; children, Edward, Gerard Stewart, Billie Jo Conrady, Jay Dean, David, Douglas Leierer, Jackie Phillips; 15 grandchildren; and 20 great grandchildren. Memorials may be made through the funeral home to Shriner’s Transportation Fund or to Freehome Cemetery.

Graveside service for William Stewart, 87 of Ringwood, will be 10:00 AM, Monday, July 22, 2019 at the Freehome Cemetery outside of Ringwood, with Chaplain Laura Nell Hays officiating. Arrangements are by Anderson-Burris Funeral Home & Crematory. William... View Obituary & Service Information

The family of William Joe "Bill" Stewart created this Life Tributes page to make it easy to share your memories.

Graveside service for William Stewart, 87 of Ringwood, will be...

Send flowers to the Stewart family.