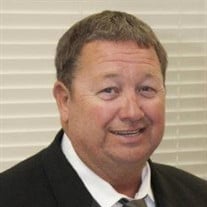 Celebration of Life Service for Bill Toone, 67 of Enid, will be Friday, July 31, 2020 at 1:00 pm in Anderson-Burris Funeral Home Chapel. Cremation arrangements are by Anderson-Burris Funeral Home and Crematory. Bill was born on February 19, 1953 in Bakersfield, California and died on July 27, 2020 in Enid, Oklahoma. He graduated from Carrier High School and attended Northwestern College, before enlisting in the U.S. Marines. Following his discharge from the Marines, he served in the National Guard. On October 7, 1978, Bill married Debra Bundy. They made their home in Enid. Bill was a truck driver for Yellow Freight, retiring in 2015. He was a movie buff, collected comic books and was the best papa to his grandsons. He was preceded in death by his wife, Debra; and dad Lee Roy Welch. Bill is survived by his children, Danielle Toone, Matthew Toone, Patrick Toone and Katie Toone; grandsons, Caleb Toone and Orin Lovelace; mother, Wynona Morgan; brothers, Michael Toone, Lee Roy Welch, and Andy McNinch; sisters, Gail Dunbar, Arlene Hale, and Paula Harrison; other relatives. Memorials may be made through Anderson-Burris to Marine Corps Scholarship Program.

The family of William "Bill" Toone created this Life Tributes page to make it easy to share your memories.

Celebration of Life Service for Bill Toone, 67 of Enid, will...

Send flowers to the Toone family.